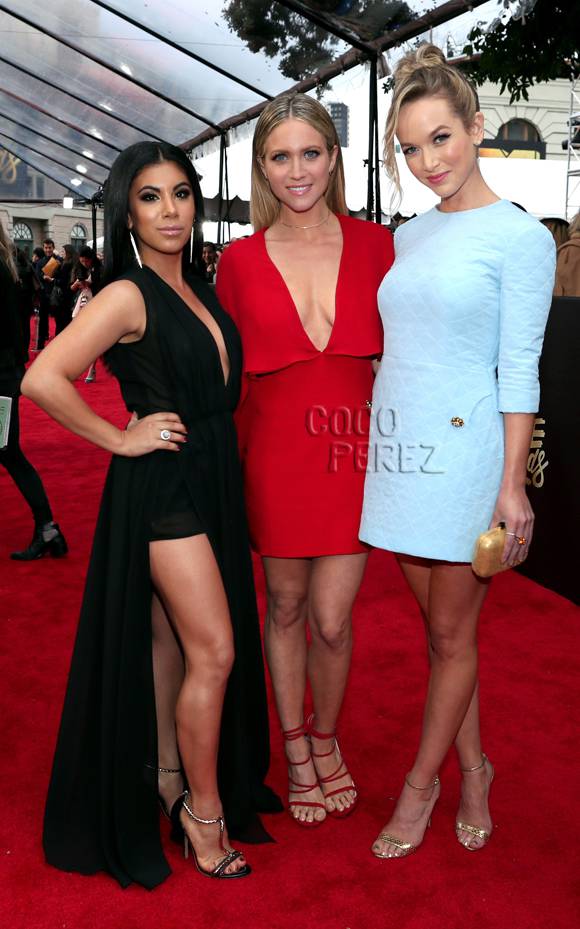 We love these pitches!!!

Britt was the standout of the group in a caped red number that revealed her chest and legs wonderfully, while Kelley was demure in 3/4 sleeved powder blue, and Chrissy showing lots of leg in bold black.

We love when the Bella’s are together! Aca-awesome!

According to Hollywood Life, pop sensation Bieber could star in the upcoming sequel to the 2015 musical comedy film of the same name. Insiders have revealed that the 22-year old Canadian singer-songwriter is more than willing to appear on the third installment of the highly popular series.

Bieber recently made a cameo as himself in Ben Stiller’s ‘Zoolander No. 2.’ He has made guest appearances in several musical biopics including Katy Perry’s ‘Part of Me’ and Zendaya’s ‘Behind The Scenes.’ Beiber has also guest starred in a number of television shows such as ‘Punk’d,’ ‘Saturday Night Live,’ ‘The Simpsons’ and ‘Comedy Central Roast.’

A source revealed that “Rebel and Justin exchanged pleasantries at the [Jennifer Lopez] concert that consisted of talk about working together and she mentioned that he should do ‘Pitch Perfect 3’ since they are mutual friends with Adam DeVine.”

DeVine played the role of Bumber Allen in the ‘Pitch Perfect’ cinematic series, for which he won a Teen Choice Award for Choice Movie Villain.

Meanwhile, according to Cinema Blend, Wilson seems to have a few ideas of her own for the upcoming film. She revealed at a previous interview that it would be interesting to have an origin story for Fat Amy. She also said that she would like the Barden Bellas to become a “legit singing group” as the members graduate from college.

Wilson plays Fat Amy, a Barden Bellas member hailing from Tasmania. She is one of the main protagonists in the series and is oftentimes the character serving as the comic relief.

Brittany Snow is also reprising her role as the Barden Bella’s Chloe Beale. According to Variety, the 30-year old joins Wilson and Kendrick, who have already closed their deals with Universal and Gold Circle.

Elizabeth Banks is set to return as director for ‘Pitch Perfect 3.’ Banks made her full-feature directorial debut in ‘Pitch Perfect 2’ after producing and appearing as a cast member on the original film released in 2012.

‘Pitch Perfect 3’ is a yet untitled sequel to the 2015 film of the same name. It is directed by actress-turned-filmmaker Elizabeth Banks and written for the big screen by Kay Cannon. It is scheduled to be released in theaters on August 4, 2017.